“Four years ago, I wrote a blog post with a catchy title: “The Death of the Buck-A-Mile Backhaul,” where I explained that carriers could no longer cover costs on $1.00 per mile. At the time, those cheap hauls were going away.

“In March 2012, there was only one major van lane paying $1.00 per mile: Philadelphia to Chicago, at 48¢ for the line haul, plus a fuel surcharge of 52¢. Of course, truckers were spending more than $4.00 per gallon for diesel in 2012, and a lot of other costs had also risen well above historical levels.

“Fuel costs are way down now — and so is the surcharge, at 14¢ for vans last week — but other costs have gone up. Total operational costs couldn’t be covered at $1.00 a mile in 2012, and they can’t be covered now.

“Yet, I regret to say, the “buck-a-mile” backhaul has returned to U.S. highways. Sure, those low-priced backhauls are paired with higher-paying head hauls, but not all roundtrips average to a profitable rate per mile.

“Here is a rough estimate of the costs per mile to operate a Class 8 truck. Everyone’s costs are different, but let’s assume for a minute that these numbers are about average.” 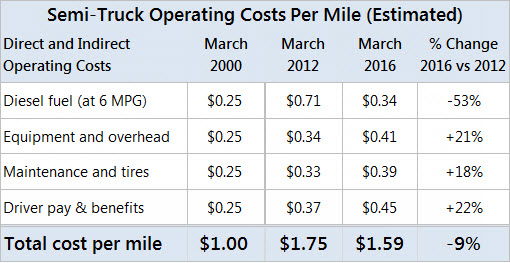 Here’s some more detail. You can plug in your own numbers.

“If you add up all those costs, you get to $1.59 per mile or more, pretty quickly. Whatever that number is for you — and yours may be higher, especially if you have additional employees, an office, a yard or other indirect costs — that’s your break-even number. You need to average $1.59 — or whatever your break-even number is — for all miles, just to keep from losing money.

“You could park your truck instead, and you’d save on fuel, driver pay, and some portion of the maintenance and tires, but you’d still have to make that lease payment. That’s an indirect cost. You pay it every month, whether your truck moves or not.

Shorepower Technologies partners with DAT to offer a special on the TruckersEdge load board to its members. Sign up for TruckersEdge today and get your first 30 days free by signing up at www.truckersedge.net/promo731 or entering “promo731” during sign up.

* This offer is available to new TruckersEdge subscribers only

About TruckersEdge®, powered by DAT®

TruckersEdge® Load Board is part of the trusted DAT® Load Board Network. DAT offers more than 68 million live loads and trucks per year. Tens of thousands of loads per day are found first or exclusively on the DAT Network through TruckersEdge.

Note: This article was adapted from DAT’s blog post. It was first published in March, 2016.

How to Survive a Buck-A-Mile Backhauls